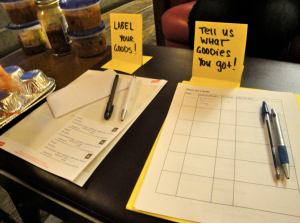 Hey, all!  We had our second swap of the year on Monday, March 25th — March was a crazy month and snuck up on us out of no where.  Our first swap of the year happened in January and February went by swap-less (but not without any exciting events!  Stay tuned for an upcoming post about a pickling party that involved beets, banana peppers, and of course, insane amounts of cucumbers — with some love and hate in the recipe for good measure).  Perhaps it’s this perpetual cold weather that keeps us feeling like it’s still the first couple weeks of the year.  I may or may not still be writing ‘2012’ on a couple forms here and there, only to scratch it out, hope no one noticed, and replace it with a ‘2013’ instead.

It was a little swap, but a great swap.  I feel that the swapping gods were looking down on us that night.  After an intense month of meetings at work, end of the year term papers and exams, tax filings, and everything else that this time of year brings, we had quite a few comforting baked goods brought to our swap — and so much variety with them too!  Scones, cookies, muffins — it was marvellous!  Nothing’s more comforting after a tough day than some homemade cookies (oatmeal chocolate chip and peanut butter cookies?  all in one?  even better!)

What’s new?  We’ve got a mail list going on!  Each month, we’ll write up a short newsletter with details about upcoming swaps, so that you can all get a small heads up about what’s going on with the swaps.  Sound interesting?  Want to sign up for the newsletter?  Shoot us an email at divideandsavour@gmail.com and just let us know that you’d like to be added.

We’re already looking forward to April’s swap, which is planned for Monday, April 29th at 7:00 pm.  It’ll be held back at the JCR inside University College at U of T again.

Get excited, though, because we’re thinking of potentially holding some outdoor swaps come summer!  No more dark and cold nights — hopefully!  (Considering the fact that it snowed on April 1st, I think we should all realize that we live in Canada and really, anything can happen, hey.)

Until next time — happy eating!

Divide & Savour is a food swap community in Toronto, Ontario, Canada. Explore this site to read about the food that inspires us and the recipes from the swaps, as well as collaborative consumption projects that operate in the same sharing spirit.

Our next swap will be in September! We'll post details as plans firm up. Tell me more.

What we write about

Except where otherwise noted, all content on this site is by Jennifer Kucharczyk and Natalie Czerwinski and is licensed for use under a Creative Commons Attribution-Noncommercial-Share Alike 3.0 Unported License.